At the end of 2017, we saw two automatics in our shop. The real amazing part was that they were both 27 inch Regina’s. Here we see how the second of these boxes started in our shop.. 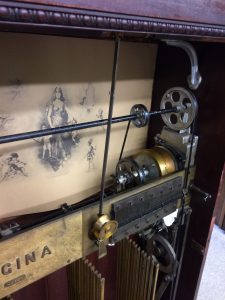 As we normally do, we started with restoring the bedplate. This included replacing the worn dampers, removing the ruts in the combs that were worn in by the starwheels, and re-tuning the combs, so that this box would sing songs beautifully again. We also replaced the pressure rollers as the old ones had signs of wear. 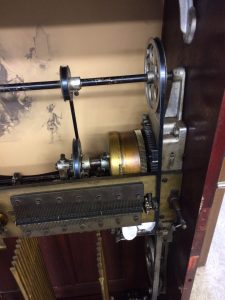 With the bedplate repainted and reset up with the newly polished and tuned combs; we moved on to the motors. Usually we end up replacing the ribbons due to rust or to lengthen the wrap around the pulleys with most ribbon lift changers.  This insures a longer life of the ribbons. This box also had somehow broken a tooth off the lift gear. We had to surgically replace this tooth, so the lift would work right again. 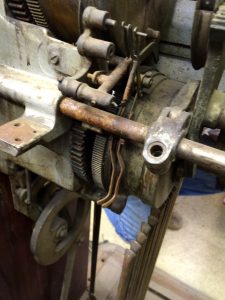 The next part was to clean the motors and regrease the springs. The disc drive pinion on this box further showed that this box had been used a lot and needed to be replaced. At some point,  this box had been worked on and someone had modified the coin-op. We were lucky to have an old coin-op that we could put in 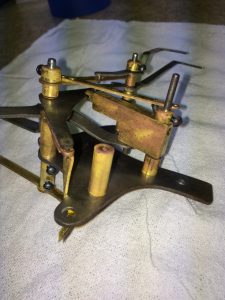 With all the parts out of the box, cleaned, polished and repainted; it was time to reassemble. This is when the fun begins of adjusting all the parts to work  together correctly. The spring barrel that powers the disc drive gear stop slots were not spaced right on the barrel, so we had to shave one to make the disc stop in the right spot.  This enables the discs  to always pick up in the same place each time. We also added fingers to guild the lift fingers to a consistent spot on the tune rack. 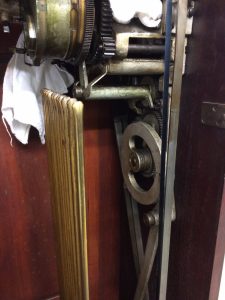 This is just part of what we did to make this 27 inch Regina operate correctly and sound beautifully again. As you can see there is a lot of work that goes into such a beautiful and complicated box. Here is the results of our hard work